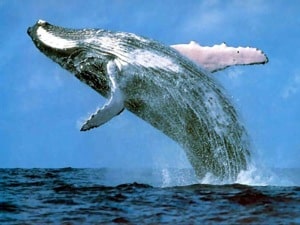 Humpback whales are gentle giants that are famous for their singing abilities, belting out seductive ballads to attract mates or to challenge other suitors. Their unique hunting skill, called “bubblenet” feeding, involves a group of Humpbacks working together to capture schools of herring.

These marine mammals travel great distances to take advantage of the best breeding grounds and feeding spots. North Pacific Humpbacks, for example, mate and give birth in Hawaii and then travel to Alaska each summer to feed.
With its warm weather, crystal clear tropical waters, and gentle channel, Maui is one of the best places for whale watching in the entire world. Humpback whales come to Maui every winter to give birth to their calves, mate, and socialize. During their time on Maui, Humpback whales are highly active on the surface, dazzling whale watchers with breaches, spy hops, and tail lobbing. Maui visitors and locals are entertained by these above-water performances.

What are the whales that I’m seeing in Maui?
The whales are humpback whales, the fifth largest of the world’s whales. There are distinct populations of humpback whales in all of the world’s ocean basins. The population that comes to Maui spends summers feeding in the cool waters of the North Pacific in the nearshore waters of Southeast Alaska and through the Aleutian Islands into the Chukchi sea. They are also found as far south as the Farallon Islands off California.
In autumn, the whales migrate to warm water areas near the equator to mate and give birth. These areas include Hawaii, the islands south of Tokyo (Ogasawara and Okinawa Islands), the Commonwealth of the Northern Marinas, and the Soccoro Islands of Mexico. About 60% of these North Pacific humpback whales come to Hawaii.

Why should I go whalewatching when I’m visiting Maui? How does whalewatching compare on Maui versus the other Hawaiian Islands?
Maui is considered one of the world’s top whalewatch spots, famous for the proximity of whales to its shoreline and the large number of whales found here. Warm sunny weather, great visibility, and clear ocean waters add up to excellent conditions for whalewatching. More than 3,500 humpback whales come to Hawaii each winter to mate and give birth, making our state the nation’s primary mating and calving ground for these endangered animals. Maui is where most of these whales are found. They are attracted to the shallow seas off Maui’s south and western shores, the relative lack of predators and the warm water temperature.

How can I see whales from shore? If so, why should I go on a whalewatch?
The best way to spot whales is by scanning the horizon, looking for a blow…the misty vapor plume that results when a whale exhales at the surface. You can also look for large splashes caused by activities such as tail slapping, breaching or pectoral fin slapping. Another trick: look for a boat that is sitting still for no apparent reason. There’s likely to be a whale nearby.
Sometimes, the whales come very close to shore and you’ll have an excellent view. Most other times, you’ll find yourself longing for a closer look. Whalewatch cruises offer you the opportunity to get closer to the whales. They offer thrills such as hearing a whale’s blow (an exhalation of 300 mph) or even seeing a whale swim beneath your boat. They are an opportunity to spend a two hours with an expert, to learn about these majestic animals as you watch their fascinating behaviors.

How close can we get to whales on a cruise?
Hawaii has the benefit of having some of the very best whale protection laws in the world. We all observe a “100 yard minimum” law, which states that whales within 100 yards cannot be approached by any means, including by boat, kayak, sailboard or even by swimming. Being wild animals, whales can approach us as they wish. It’s not uncommon for whales to come up alongside the boat, or may even swim beneath it. We call these events “whale muggings.” The boat captain can’t move the boat until the whale has departed!

Where do you go to see the whales? How far do you have to go?
Typically, you don’t have to travel by boat for more than ten minutes before you begin to see the humpback whales. We often see whales just minutes after leaving the harbor.

What’s the best time of day to see the whales? When are they most active?
Based on two decades of experience with whalewatching and whale research, researchers have found that all times of day are good for watching whales. They appear to be active throughout the day. More than time of day, the ability to see whales depends on conditions such as wind speed, sun glare or sea state. When you go whalewatching depends on your preferences. Morning offers ultra-smooth, calm conditions. Go in late afternoon, and you can enjoy a sunset as well as a whalewatch. And midday is popular too — it’s a nice time to take a break from the beach. So really, just pick the time of day that’s best for you. Pacific Whale Foundation has 15 cruises available each day, seven days a week, from both Maalaea and Lahaina Harbors.

What’s our chances of seeing them?
During Maui’s “whale” season, you have an excellent chance. It’s so good that some operators (including Pacific Whale Foundation) guarantee you see whales. The peak of the season is in January, February, March and April, but whales are commonly seen in Maui from December through early May.

Which is the best harbor to leave from?
Both Maalaea and Lahaina Harbors are in the zone where whales are most frequently seen. Save time driving and choose the harbor most convenient to you. Cruises from both harbors generally travel in the “lee” of the West Maui (Papawai) Mountains, where wind is not an issue. We suggest choosing the harbor nearest to your hotel or condo, to minimize driving time.

How do I choose the best whalewatch?
From knowing where the whales are most likely to be found, to understanding Maui’s weather patterns, the best cruises are offered by the most experienced operators. Go with the best experts you can find. Look for an operator with modern, well-equipped boats. In general, the most modern vessels feature the most efficient, low-polluting engines. Some whalewatches are powered with eco-friendly fuels made with recycled vegetable cooking oils. Also look for cruises staffed by rigorously trained and certified naturalists. You can also help whales by choosing a cruise that donates its profits to marine conservation. Be sure the company clearly delineates the portion of the profits or ticket sales going to protect whales.

What kind of boat is best? Can some boats get closer to the whales?
Whalewatch vessels on Maui range from kayaks to rafts to sailboats to power catamarans. All of these boats are restricted from approaching whales closer than 100 yards. Rather than choose a boat based on promises to get “closer” to the whales, select one that’s stable and comfortable, with unobstructed viewing of whales. Catamarans tend to be more stable and are designed so that everyone on board can enjoy a good view of the whales.

What are hydrophones? Are they important?
One experience not to be missed is listening to the haunting songs of male whales. Hydrophones are sensitive microphones that can be lowered into the water. This is done when the boat’s engine is turned off. The sounds are usually played over the boat’s public address system. You’re likely to hear not one but several singing whales in the area. Be sure your cruise is equipped with hydrophones so you can hear the whales’ songs during your whalewatch.

Will we see a breach?
One of the thrills of whalewatching is that you’re observing huge animals that are wild and free and somewhat unpredictable. Because the whales are in Hawaii to mate, give birth and care for their young, there are fascinating behaviors that occur here, such as “singing” or the intense shoving and pushing of males as they compete for a position near a receptive female. Certainly, breaching is one of the more dramatic of all whale behaviors, and is a treat for all viewers, but there are many other whale behaviors that are as equally engaging to watch.

Why do whales breach?
This behavior is seen in many species of cetaceans. It takes place at the feeding areas and at the warmer calving areas. One theory is that whales breach when they hear a boat in the vicinity; breaching lets them visually scan the surface for boats they hear but cannot visually or acoustically localize underwater. Recent research indicates that breaching is more likely to occur when a male humpback approaches another singing male humpback or joins a surface active group. The aerial act of breaching could be a display of dominance and aggression in this circumstance.

What do the whales eat here?
Whales don’t engage in feeding behaviors in Hawaii. They may feed opportunistically, but there is actually very little food for them here. Keep in mind that the most nutrient-rich areas of the world’s oceans are the cooler, polar regions. These areas support large populations of small fish. In contrast, Hawaii’s warm waters contain much less nutrient material (which is why our ocean is so clear). Humpback whales of the North Pacific spend their summers feeding in an area that stretches from the Aleutian Islands of Alaska to the Farallon Islands of California. A whale can consume nearly a ton of food per day. (In the North Pacific, humpbacks feed primarily on small teleost [bony) fishes such as herring and capelin.)

How many whales are usually seen in a pod?
Humpback whales do not appear to form stable groups or long term bonds, with the exception of the mother and calf bond, which lasts a little less than a year. In Maui, mother-calf pods are seen more frequently than single adults or larger groups of four or more whales. Sometimes an escort whale will join the mother and calf. It is assumed that the escort is a sexually active male. Typically, he remains with them for less than a day — most associations last only a couple of hours, or in many cases, only a few minutes.
Larger pods are often formed by a group of males as they compete with each other to get near to a sexually receptive female.

When are the calves born?
Sightings of calves occur most frequently after late January. The average gestation time for humpback whales is 10 to 12 months, so that calves conceived during one breeding season are born during the next winter’s breeding season.

I want to take photos…what’s the best film and camera choice for me?
If you don’t have a digital camera, bring along ASA 200 (or 400) film; a 80-200 mm zoom lens is helpful. Set your shutter speed for 1/500th of a second to freeze the action and minimize the effect of the boat’s movement. Hold the camera steady; don’t try to follow the motion of the whale. Have a video camera? Avoid excessive zooming and never film into direct sunlight.

No, you don’t have to go on a boat to see whales if you are here during the right time of the year. It is common to see people standing on a hillside overlooking the ocean and watching the signs of distant whale activity through binoculars.
You can often SEE whales from shore … but you can’t EXPERIENCE them from that distance. There is a tremendous difference between watching a whale splashing in the water two miles away and experiencing the thrill of looking over the edge of the boat and having one of these gentle giants swim directly underneath you. If you are here during peak season from December 15th to April 15th, do yourself a favor and go on a whale watch.